From a War Zone to Pink Skies

Growing up is hard. Growing up and witnessing wars, police violence and people that look just like you being killed from afar on the television screen is a tough reality to navigate for a 16-year-old African America boy. Kenytta Brown sees the ugly truth in this world, but refuses to ignore the beautiful skies and palm trees around him. Photo Courtesy Onelia Hawa 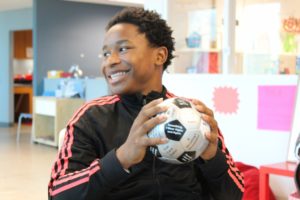 When I was younger, I saw the world as a perfect place. The world was like a playground to me. I thought I didn’t have to worry about anything as I sat on the couch every day and watched cartoons like “Kim Possible” and “DragonBall Z.” I would wake up each morning and say that I live in this perfect world and go eat some of my favorite cereal, Frosted Flakes.

I thought there was no such thing as pain, as I went outside to play with kids I called “friends,” having the greatest times of our childhood. I had the mentality that everything was going to be perfect. My mother never told me about the real world when I was young. She thought I wasn’t ready for it because I was immature and lazy. I believed in living my life to the fullest. I ignored my mother and did things I shouldn’t have done. I would come home late, spend my money on junk and toys, and mainly get in trouble in school.

When I turned 10, everything changed. I started to realize the friends I had back then aren’t who I thought who they were. I felt alone with no one to talk to. My mother wasn’t the nicest any more; she went hard on me. I remember my mother telling me, “One day you gone learn about the real world.” And I had to learn the hard way. I was losing friends and family. I remember what my momma told me: “In the real world, nobody cares about you, so you got to make it in this world. You will have people pushing you left and right except up.”

It felt so different, as if I lost sight of hope and everything that I liked about the world. I was seeing people crying as they saw their sons or husbands inside a casket. The Iraq War was a tragic time for the world as we watched the news and learned of the deaths of innocents.

I had more responsibilities than I ever had. I had to watch what I bought because life was getting tougher. I had chores like cleaning my room, kitchen, living room and the bathroom. I had to think more about school and my grades. Even school was getting harder. I was getting bullied everyday. I just told myself: “This isn’t what I imagined. Life was supposed to be perfect and happy, not heartbreaking with twist and turns.”

Imagine your mother being brutally honest about everything she told you about the world and the people who live in it. It was heartbreaking because I thought the world was sunshine and rainbows, but it was more like dark skies and lightning. Life wasn’t important to me anymore.

Now that I’m 16, I see the world as a war zone. You’re walking in a neighborhood looking around praying that you don’t die. Now I think about death every day, just thinking about what happened if that was me. Now I wake up and say, “What kind of a world do we live in?” I used to wake up to sunshine, and now I see dark skies and rain in my eyes. I walk and see thugs and homeless people. And in their eyes, they just want to die and take the pain away.

I realize that you have to watch who you hang out with because your closet friend can be your worst enemy. The world is cold and ruthless, and you’re not safe anywhere! I remember what my momma told me, about people not caring, pushing me left and right, but not up. Right then, I knew one day I was going to be on my own. Because in this world the only people who can change is us.

But one thing I’ve always liked about the world is its beauty. The skies are blue and pink. The palm trees, the landmarks, everything I notice about the world are beautiful but with a ugly truth. My question to myself is when I turn 50, will I look at the world the same? I hope it will change. One day it will.