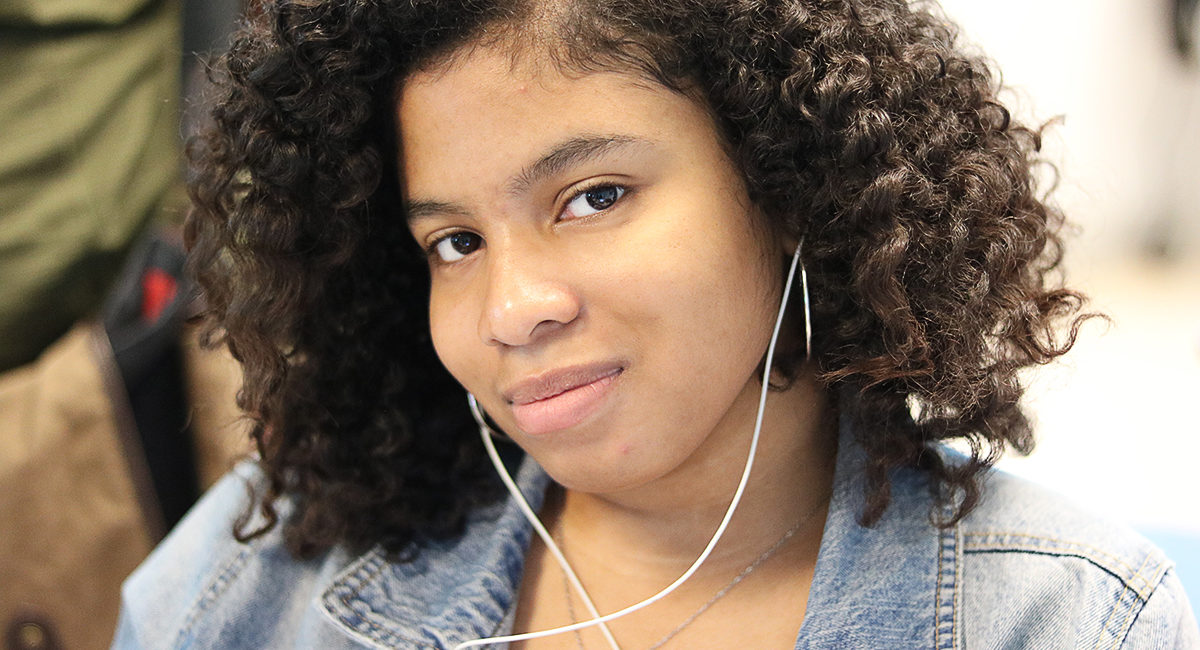 Photo above of Asia Mangum by Kaitlyn Fowler

Asia Mangum was sitting at her desk when her outgoing teacher, Mr.Clark, instructed everyone to stand up by their desks. The class was about to play an introductory game to get to know everyone. Each student was to state their name, age and favorite thing to do.

When it was Mangum’s time to speak, she had to repeat what the previous classmate had said in addition to her introduction. As she finished and was about to squat back down into her seat, she heard a student yell from across the room.

“White girl” became her new nickname, but she couldn’t help that she articulated well and spoke properly. When she is called “white girl,” Mangum says, “It makes me feel like an outsider, like I’m not good enough, something’s wrong with me, I’m not black enough.”

Still, Mangum tried to fit in by speaking ebonics and talking “ghetto.” She and everyone else knew it wasn’t her, and it didn’t sound right coming out of her mouth. But she hid her true self in order to fit in. On the inside, Mangum knew who she portrayed wasn’t who she was comfortable being.

On one Youth Day at church, the pastor was preaching powerfully with words that seemed directed straight toward her. He was talking to the young people about going through hard times, who thought their parents wouldn’t understand. But, he said, if you bring it to God, He will take care of it for you. Mangum felt deeply moved and went home crying to her parents. She poured out a confession, telling them everything she had been doing and how she wasn’t being who she knew she was on the inside.

Her family warmly comforted her and let her know it would all be alright. From that moment on, she stopped trying to be who people wanted her to be and committed to embracing who she was. By doing this, Mangum found more happiness and peace within.

“After that, I just stopped trying to be who people wanted me to be like. I was just trying to be myself, and I was happy doing that,” Mangum says.

Mangum wants to see people be more accepting of others and who they are. She gives examples of black people and other people of color being treated as inferior in the workplace; the stereotypes of those in the LGBT community; and men locked inside the box of masculinity as areas that need improvement in society.

“Men, you know, I feel like they’re still in this type of bubble where they can’t cry or they can’t show emotion. They have to be masculine, and I don’t think that’s right,” Mangum says.

For Mangum, writing is an escape from the clutter of thoughts in her mind. She finds peacefulness and comfort in writing that helps to her deal with life. She remembers being in the sixth grade when the teacher gave the class the fun-filled topic of fairy tales. She chose to create the story of a mermaid named Makenzie.

“I just find so much comfort and pleasure in it,” she says of writing. “I feel like I have such a busy mind, like my mind is everywhere, and I can’t wait to put something down on paper and write about it,” Mangum says.

Mangum would like to be an author, poet and TV producer. “I want to create this whole world of dopeness,” she says. She also wants to contribute to comic books, creating her own superheroes that would show more representation for people of color in the animated character world.

The Murrah senior says she wants “excitement. I want excitement.” She wants adventure, to explore and to have fun in life. She wants people to read her work and know that she gets it. When she gets older, she wants to live in the beautiful city of Portofino, Italy, and tell crazily amazing stories about her life to future grandchildren, nephews and nieces.

Mangum wants to truly find God in her older years and live a life that she will be satisfied with. She advises those who have goals to go after them, push yourself and don’t waste time. Also, she says, stop making excuses and surround yourself with positive people who will encourage you. Although it is cliché, it makes all the difference in how much you will grow.