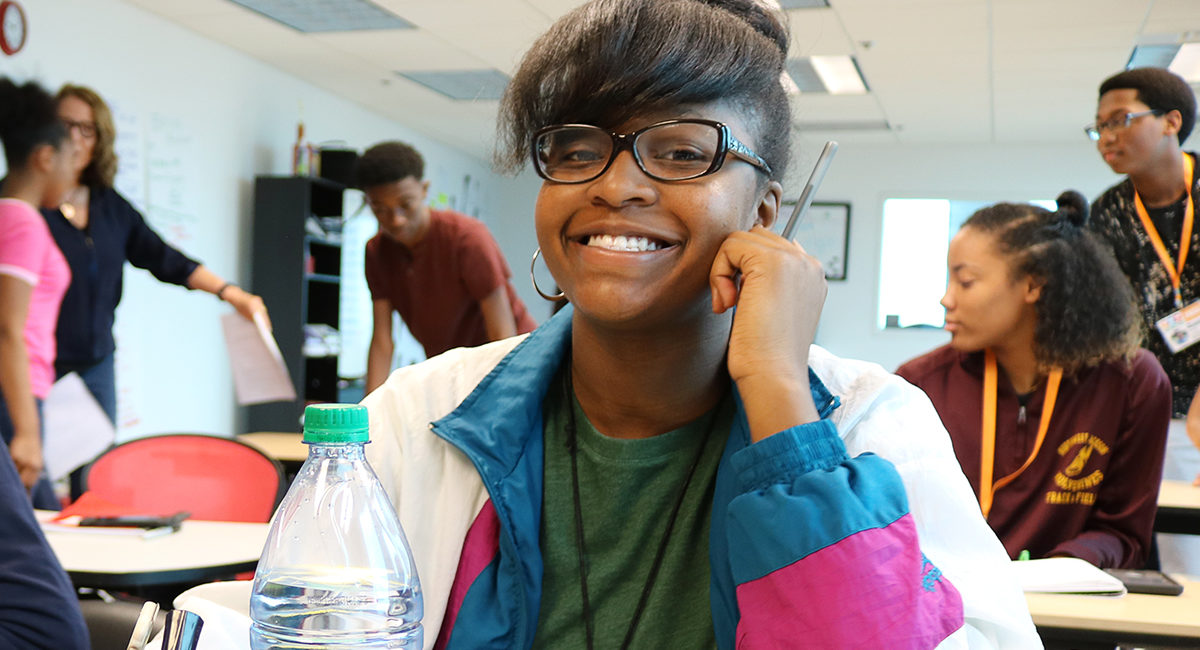 Maleah Briggs: The Music Within

Photo above of Maleah Briggs by Kaitlyn Fowler

In 2001, a pregnant Andrea Gordon sat in her living-room chair, contemplating her soon-to-be baby girl’s name. She scanned through long lists of names in a book, none of which appealed to her. “None of these fit my baby,” she said to herself.

Then her brown eyes fell onto the name Maleah. The meaning was adjacent to the name: “Unique and beautiful.” She read it out loud, and it felt right to her. On April 28, 2001, Maleah Dawn Briggs was born.

Briggs is a 16-year-old former Terry High School student who will attend the Mississippi School for the Arts in Brookhaven this upcoming year. She likes to write and listen to music, especially anything with live instruments. She has never been to a concert but she wants to someday. “I was in band, so when I hear electronics imitating live instruments, its like an insult to real instruments.” Briggs said she still enjoys eight-o-eights (drum machines).

“Back then, before our time, you had to really be on your game and have actual talent,” she says, explaining her deep respect for musicians.

Since Briggs considers herself an introvert, writing is her way of expression. She used to have a lot of insecurities and pent-up emotions. The first form of writing she did was poetry, which she got from her father, Micah Briggs. A lot of the music he listened to, such as Erykah Badu, Mos Def and Jill Scott, inspired her to write poetry. “Not to mention, he’s a poet, too,” she says. “So that’s why writing and poetry go together (for me).”

Briggs also likes to read. Her favorite books are by Sister Souljah, which are about the black community and how certain situations turn out. For example, “The Coldest Winter Ever” is about a drug lord whose business falls apart. He then goes to jail and loses his family.

“There are three books, and they all intertwine and pull from each other to make one big story,” she says. “A Deeper Love Inside,” the second book of the “Sister Souljah” series, is her favorite book. The novel tells the story of Porshe, following her life while her dad is in jail, her mom is on crack and the struggle she goes through in adolescence while she falls in love.

Briggs says her family is a bit tough on her. They allow her to be independent, but still maintain a leash on her. “They prepare me for the real world, and how to handle it. They don’t baby me, and I’m fine with that. Sometimes they get on my nerves.” But, she adds, “They can be tough, but they can be sweet also. I know they got my back.”

Her family plays a big role in her love for music. “At any random time, we could have a karaoke night. It depends on whoever has the mike,” she says. Her go-to karaoke song is anything by Beyonce or Destiny’s Child. But her older sister, Tyra, takes the crown when it comes to the competition.

“I don’t know why she wins. She can hold a tune but can’t sing really good,” Briggs says. “Tyra is always in her feelings and picks slow, draggy songs.”

Briggs plans to be a professional musician. She plays the saxophone, but she wants to learn other instruments such as piano, guitar and drums. “I hate to think of back-up plans, because I don’t like to think of failure,” she says.

But because writing is another one of her passions, it is most likely her fallback. “I still want to be involved with music, so I would be a ghost writer for an artist,” she says. She would also like to write TV shows and movies. “I just want to create content,” she says passionately. ” My mind has too much going on for me to settle on one career option.”

Briggs looks up to her grandma, Shirley. “She’s the person we all go to. And she never complains; she’s always willing to help out,” the granddaughter says. “For that I admire her, also because she’s just a nice person.”

“YMP is important because I want to see changes in the community,” she says of the summer project. She also wants to buckle down on her writing skills, photography and music production. “I think Donna (Ladd) has a lot of advice and information to offer, and so I want to absorb it all.”