Asia Mangum: A Poet and Activist in One 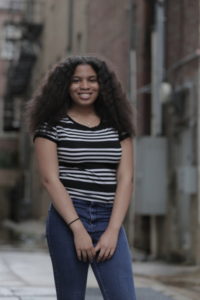 Asia Mangum, 15, is a lover of romantic and activist poetry and writing. Her favorite poem, “Mother to Son,” by Langston Hughes is one that has stayed with her after she first read it around the time of her mother’s birthday several years ago.

“It got to me because the metaphors (Hughes) used, a lot of people (in my class) didn’t understand, and I was the only one,” Mangum says.

The poem reminds her of how her mom has sacrificed so much and all that she has put aside for Mangum’s well-being. She says Hughes’ mom went through many things, too, and that her life was no glass staircase, but she tried her best to make a better living for herself and her child. Mangum says that the poem also talks about how black people weren’t treated well “coming up.”

The youngest of four children, ages 15 to 22, Mangum will be in the 11th grade at William B. Murrah High School in fall 2016. Many people don’t know that she has a paternal twin, Ashley.

“We are one minute apart, and she doesn’t look anything like me,” Mangum said. “We don’t act alike, but we still get along well.”

Mangum is a strong believer in positive media. “I think it’s important when it comes to media and reporting that both sides of the story (are) told; because if they’re not, that’s where people get their biased and negative ideas from,” she says.

The Jackson native wants the media to better represent youth because she said, at this point, adults think that the majority of the youth populations are “hooligans.”

“That’s how movies and the media portray (teenagers),” Mangum said. “(They tell us) we are young, and we don’t know what were doing, and that we’re not mature enough to make our own decisions.”

Mangum encourages adults of all ages to be open-minded and trust teenagers and give them the benefit of the doubt because those adults probably went through the same things and acted the same ways in their youth.

Her goal for the future is to be a successful author and a TV producer. Mangum wants to write because she wants to develop characters who are diverse and represent various communities, including black, Hispanic, Muslim and LGBT. She wants to be a TV producer because, even at age 15, Mangum makes up scenarios in her head about what her shows would be like.

Mangum’s English and creative-writing teacher, Harriet Smith, is her biggest influence because she helps develop her writing skills. Her friends also push and support her ideas and thoughts. Mangum says her mom is another big influence because she informed her about the Youth Media Project and encouraged her to come and gain the experience. Mangum says that she is at the Youth Media Project because this program is a great opportunity to use her writing as a means to speak up and talk about injustice for the youth around her.

The main thing she doesn’t like about Jackson is that there is too little to do and then people wonder why young people are getting in so much trouble. Mangum feels like there should be more programs available to youth, like the YMP, to keep teenagers and young adults occupied. She thinks that the government is investing its money into things people don’t even need.