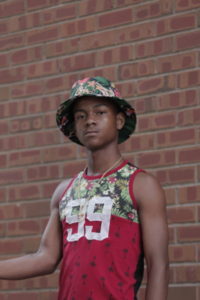 Growing up, he has seen a lot of conflict in his neighborhood, where drug dealing and violence are common. “It was more about what was going on outside your home that made you feel like your home was rough,” he said.

Harrington now wants to change the world and show people that there are other ways to handle situations, instead of violence. His role model is Lil Boosie, because he feels the rapper’s pain and has gone through the same problems. Lil Boosie’s reality showed Harrington that there are hope and opportunities in the world.

The young rapper, who goes by Kvng Zeakyy, wants to inspire young kids with his music. He tells them to focus on what’s right and never give up on your dreams.  “It’s about what you know you should have, what’s making you eager in your mind to do the other thing. It’s real,” he said.

Harrington is trying to be his best and make a change in the world everyday, and finds that experience “awesome.” His biggest challenge is making it where he is now because people have doubted him and pushed him from left and right, instead of up, he says. While growing up, Harrington has been in a lot of situations that tried to bring him down. But he kept his head up and is now motivating his peers that it’s not over and that they can learn new skills and be successful.

The reason he came to the Youth Media Project, he says, is “because Donna brought me here,” referring to YMP founder Donna Ladd, who met Zeakyy when she was writing stories about young men growing up in the Washington Addition. But he was kidding. He joined YMP to get better at doing video and to learn new skills to help his career.  “I may come from the hood, but I’m not dumb,” he said.

Harrington loves Jackson, and he likes coming downtown now for the Youth Media Project. “Let Jackson be Jackson,” he said. But he does think the city needs to improve its streets.